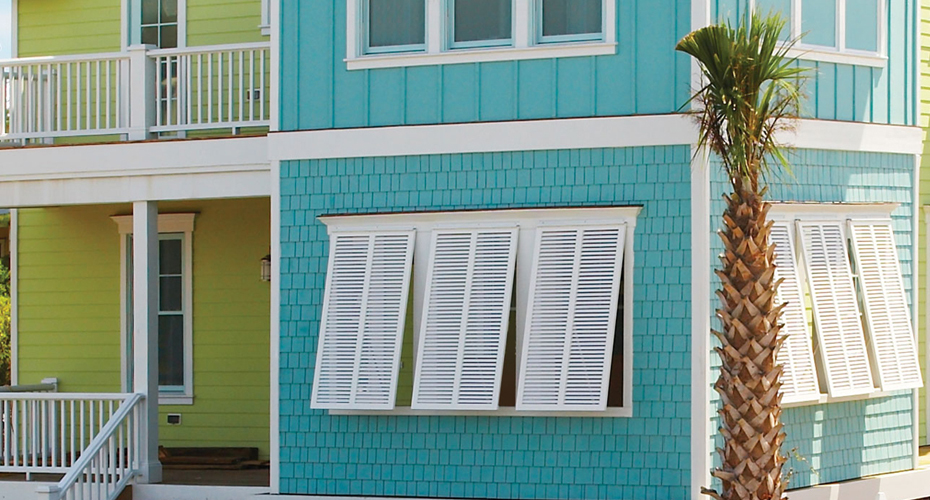 Shutters seem pretty straightforward. But do you know the lingo well enough to sell them confidently to your customers? Here are a few common terms you should know.

Board and Batten
Board and batten shutters are vertically oriented boards typically featuring a minimum of two wide strips, called battens, horizontally fixed with narrow trim in between.

Bahama
Rather than swinging in from two sides, Bahama shutters install singly and swing upward. As their name implies, this style is used frequently in the Caribbean because it blocks UV rays while allowing in ambient light and breezes. A sophisticated privacy solution for coastal locations or homes with a coastal-style exterior.

Storm Shutters
These specialty units are made specifically to withstand the impact of wind-driven debris. Open, they look no different. During a storm, they close and lock into place with storm bars to protect the shutter leaf, the window, and the home’s interior. Before buying, verify that your storm shutters meet the Large Missile Impact Test requirement as specified in the IRC and IBC 2006.

Operable vs. Decorative
Historically, shutters were more than just a decoration. They were used to block out sun, control temperature, and provide privacy. But, as Fine Homebuilding explains, those uses were less needed when drapes and blinds became the norm. Today, most shutters are purely decorative, or inoperable. Operable shutters, like those from Atlantic, still offer those same benefits as well as an extra dose of authenticity.

Holdbacks
Holdback hardware does just what it says: holds operable units in place but is easily turned to release the panel for closure. Common styles include the elegant S holdback, a simple dog post holdback, or a scrolling rat-tail holdback. They’re not just for operable units: Use holdbacks for decorative shutters to ensure an authentic look.